Door To Hell, Turkmenistan: One Of World’s Most Dangerous Places

Nature keeps extraordinary secrets, enjoys its magnificence, and continues to be awesome. We, on the other hand, set out in the pursuit of those secrets, feed our fantasies, and become winsome!
The Door to Hell in Turkmenistan is a true wonder of nature located near Derweze Village in the Karakum Desert. One of the most dangerous places in the world, it is a burning reserve of methane, almost the size of a football field. It has become popular as a major tourist attraction in Turkmenistan since 2009, thanks to global travel communities on social media.
The crater of fire in the Derweze village, also known as Darvaza village, looks fascinating and certainly generates a lot of curiosity. It happens to be one of the popular tourist attractions in Middle-East Asia and is certainly a must-visit attraction in Turkmenistan.

Map of Door To Hell

How to reach the Door to Hell

Image Source
By air: Ashgabat International Airport, 10 km to the northwest of the capital city is the nearest airport to Darvaza Gas Crater. The crater is 275 km from the airport and takes around 3.5 hours to reach by road in a private vehicle.
By road: Darvaza Gas Crater is a 3.5-hour drive from the capital city Ashgabat and 6-hour drive from Dashoguz.

Stays near Door to Hell

Image Source
Spending a starry night beside the illuminated crater certainly sounds exciting. Therefore it is suggested to plan a wild desert camping in the vicinity of the burning crater. Carry your camping gears beforehand. After a making your way to the crater through the dunes the camping stint would soothe your soul.

Stay informed that there are no places to stay around the Door to Hell. However, towards the north of the crater along the main road there are a few Chaikhanas in Darvaza that arrange for a bed for night, food, and petrol if the need be. The rates are fairly priced at around $10. Also, there are a few yurts in the 150 m range around the crater priced at $10.

Other popular attractions in Turkmenistan

Surrounded by Iran, Afghanistan, Uzbekistan, Kazakhstan, and Caspian Sea, Turkmenistan is the land of ancient forts, ruins, historical museums, and a lot. Apart from the Door To Hell one can really look into the pre-historic attractions that make the country a delight for explorers. You can really take a day tour to these places and see how beautiful this Asian country is!

The museum is an interesting place to be at when you are out on a day tour in Konye-Urgench Museum. Quite interestingly, the museum, located inside the complex of a Madrasa, has wonderful symbols carved on stones, Arabic texts to exhibit. You can also find, a display of Turkmen culture, carpet looms, pottery workshops in the museum. 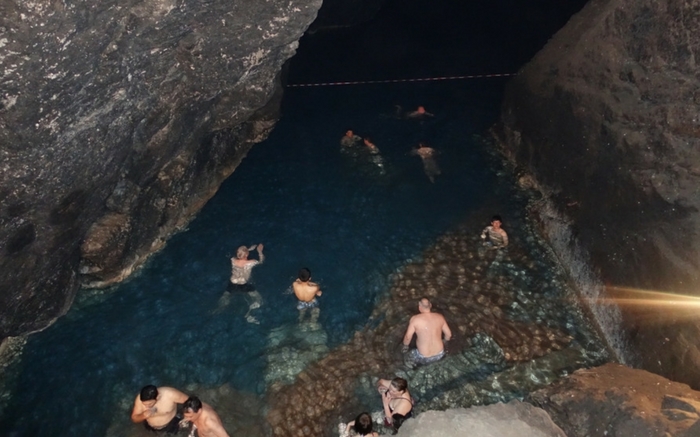 Image Source
A long metal staircase lease to this hidden wonder located inside the Bakharden Cave. Almost 235 feet under the ground, this hot water spring contains mineral, salt, and mostly sulphur. This place is perfect to go out and spend some cool moments away from the toll taking everyday life.

The water in the lake is lukewarm at 35 degrees celsius and is a thermal spa in itself. This place was established to protect the largest group of bats in the Central Asian region. Certainly, Kow Ata Underground Lake is one of the top most attractions in Turkmenistan. 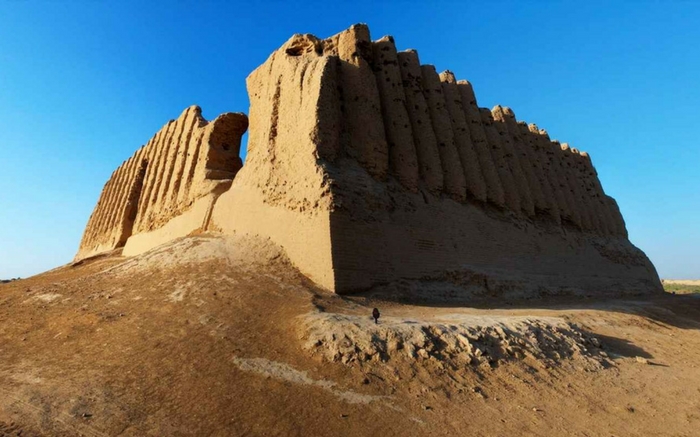 Image Source
Located along the iconic Silk Route, this place is another preserved monument towards the southeast of Turkmenistan. Ancient Merv was the capital of vast empires in the Central Asia and has wonderfully designed complexes and urban centers making the ancient city a grand spectacle.

One of the finest pieces of architecture in Turkmenistan, the Geokdepe mosque is wonderful depiction of Turkmen architecture. The mosque was built way back in 1996 by the first president of Turkmenistan. A perfect stop it is located 30 km from Ashgabat.

Image Source
Parthian Settlement of Nisa is a UNESCO World Heritage Site and has stories from the two worlds, the old Nisa and the new Nisa. The settlement belongs to the Parthian Empire that ruled from mid3rd century BC to 3rd century AD. Plan a visit if you are into history and ancient civilisations, this one came out of excavation and contains a lot of interesting facts that contain the cultural and architectural remains from the ancient times.

The more you travel the better you come to know about the interesting world that we live in. Keep looking for places and nature will never cease to amaze you with its awesomeness!