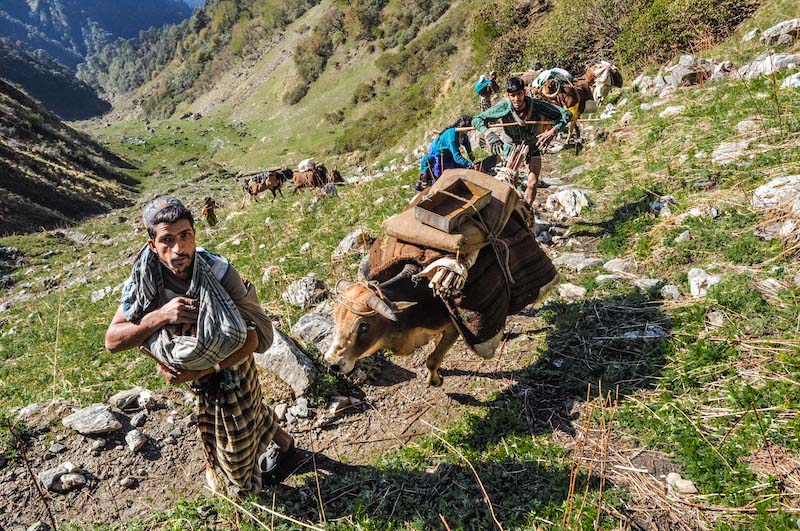 I learnt about Van Gujjars while reading the book Himalaya Bound by Michael Benanav. Later on, out of curiosity, I started to find out more about one of the oldest aboriginal residents of the Himalayas. And that’s how this post happened!
The Himalayas are home to a number of exquisite flora & fauna species. But, besides the excellent biodiversity, there are plenty of things that the Himalayas have been sheltering & protecting over the centuries. Yes, there are aboriginal Himalayan tribes who never chose to move down to the plains. People who stayed in the mountains and became, of the mountains! Rulers & governments changed but they didn’t. Laws got amended in the big-government buildings but they lived as independently as they had been over the ages.
Over the period, the loss of nature & wildlife and several partitions have only posed new challenges to these dwellers of the wilderness. But they are as important as any other component of the ecological community, and they must be heard, they must be protected! One such indigenous tribe in the Shivalik range in Northern India is Van Gujjar.

Who are Van Gujjars? 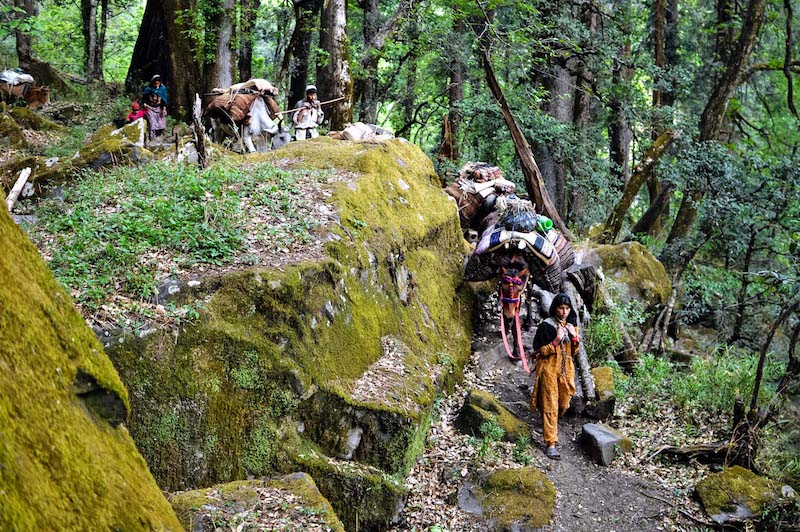 Van Gujjar tribe, also known as the nomadic water buffalo herders live out of tarpaulin tents & are constantly on the move, okay not constantly but seasonally. Their lives revolve around the domesticated buffaloes, and they dedicate themselves caring and finding food for them. Van Gujjars spend their winter in the wilderness of the Shivalik Hills. It is here that their cattle find juicy green vegetation, so plenty of fodder around, and enough of isolation from the outside world, in which they never considered themselves as the right fit.
By the time April approaches, the Northern Indian lowland temperature soars beyond 40-degree Celsius, plenty of leaves and grasses wither, and cattle aren’t left many options. Moreover, smaller water sources run dry. As a result, the entire tribe migrate to the higher Himalayas in quest of good fodder. Plus the weather is more pleasant at higher altitude.
This semi-nomadic community is mostly a follower of Islam, and have a different set of rules & principles. Over the decades, the Van Gurjars have had conflicts with the forest authorities, who prohibited human and livestock populations inside a reserved park, and blamed the Van Gurjar community for poaching and timber smuggling. After the creation of the Rajaji National Park (RNP), the Van Gurjars in Deharadun were asked to shift to a resettlement colony at Pathri near Haridwar. In 1992, when they returned to the foothills, the RNP authorities tried to block them from the parking area. The community fought back and finally, the forest authorities had to comply.
A lot has changed this summer. The COVID lockdown has affected their migration, and the situation could be so grave that their survival would be at stake.
Image Source: The Better India
You can also read the story covered by TOI here!